Get Carter has been remade twice, once as a blaxploitation film called Hit Man in 1972, and again as a remake in 2000 starring Sylvester Stallone. Both use the original book as their source, but Hit Man was noticeable in that it was a virtual shot for shot remake of the film (with locations changed).

Warner Bros., now in possession of the pre-1986 MGM library, decided to produce a remake in 2000 under the same title, with Sylvester Stallone starring as Jack Carter. As with Hit Man, the film credited Ted Lewis’s Jack’s Return Home as its source, not Hodges’ film, and again it contains scenes which are directly borrowed from the original, such as the opening train ride. Michael Caine appears as Cliff Brumby in what Elvis Mitchell described as “a role that will increase regard for the original”, speculating that “maybe that was his intention”. Mickey Rourke plays the villain Cyrus Paice. The remake was compared unfavourably to the original by the majority of reviewers. The consensus opinion of critics on Rotten Tomatoes was that it was “a remake that doesn’t approach the standard of the original, Get Carter will likely leave viewers confused and unsatisfied. Also, reviews are mixed concerning Stallone’s acting”. It was so badly received on its US release that Warner Bros. decided not to give it a UK theatrical release, anticipating the film would be savaged by British critics and fans. Elvis Mitchell in The New York Times wrote “it’s so minimally plotted that not only does it lack subtext or context, but it also may be the world’s first movie without even a text”. Mike Hodges said in 2003 he had still not seen the remake, but was informed by a friend that it was “unspeakable”. His son brought him a DVD of the film back from Hong Kong and he tried to watch it, but the region format was incompatible “so we put it in the dustbin”. In 2004 the film was voted the worst remake of all time by users of British DVD rental website ScreenSelect (precursor of Lovefilm).

Another film based on Lewis’s book, Hit Man, directed by George Armitage and starring Bernie Casey and Pam Grier, was released in 1972, taking some plot details and treatments, such as a sniper shooting Carter on a rocky beach, from Hodges’ film.1 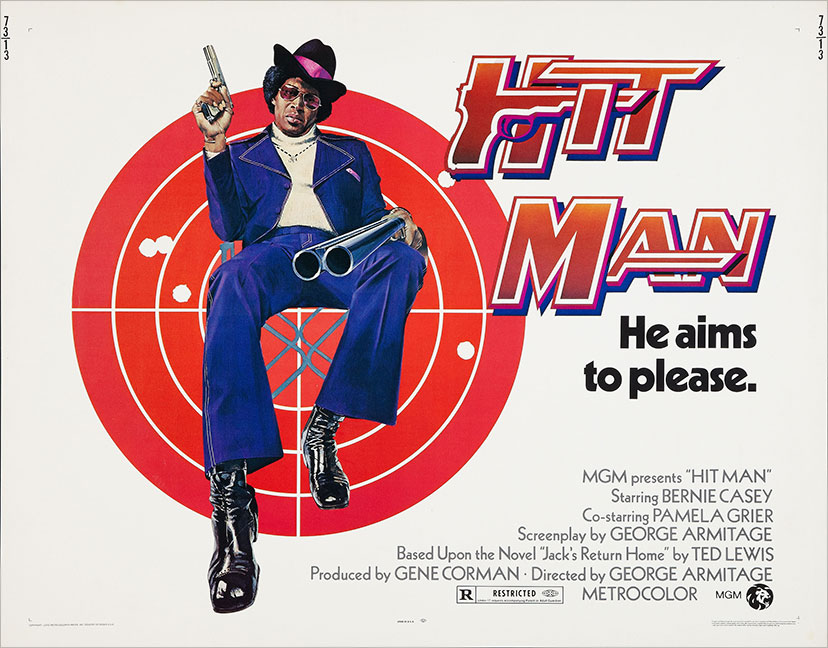 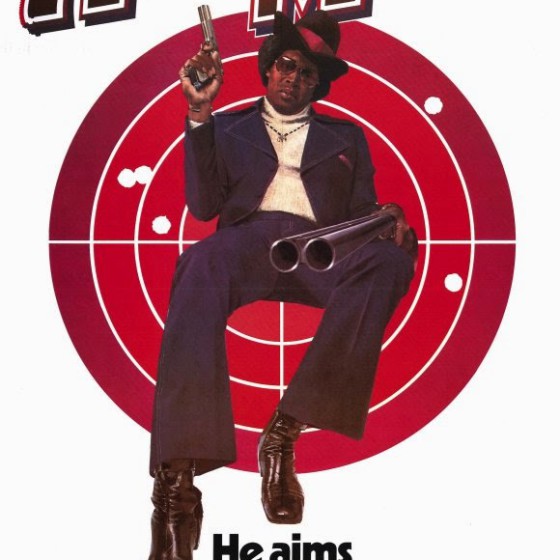 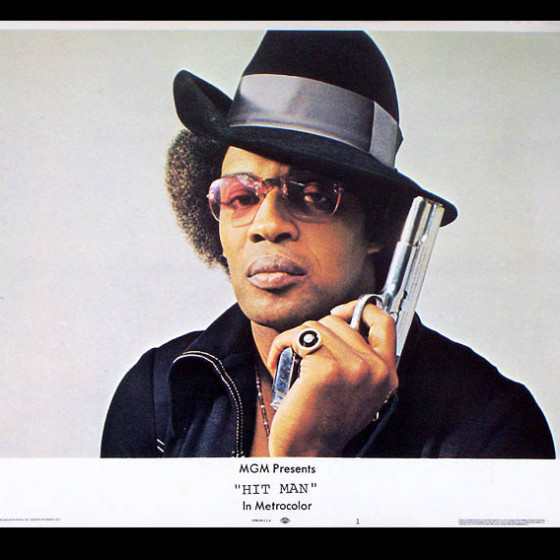 A friend of mine who saw “Hit Man” at a screening the other night had the curious experience of finding that although the plot was very complex and virtually incomprehensible, he nevertheless always knew what was going to happen next. Later, he realized that he had seen it all before, in a film called “Get Carter,” which starred Michael Caine and played here last year.

“Get Carter,” set in Newcastle, was a murder mystery having to do with the seamier insides of the pornographic movie business. “Hit Man,” which opened yesterday at several local theaters, keeps the murders and the dirty movies, but the action is now in Los Angeles, and everybody’s skin is black.

I shan’t go into the story, which I could describe completely and still leave you unenlightened. But it obviously owes a lot to the Raymond Chandler tradition of detective fiction. In “Get Carter” (which I have not seen) the debt is apparently well paid by way of explicit nostalgic allusion. In “Hit Man” the debt is simply ignored. Its interest is life style rather than literary style, and as it turns out, that is interest enough.

There have been very few recent movies quite so pleasantly involved with their locations—from improbable mansions to seedy cottages, from skyscrapers to one-man (or one-woman) motels, from the home-made surrealism of Watts Towers to a suburban game preserve full of sullen lions and tigers—and very few movies so aware of the kinds of unpretentious entertainment that merely being on location can offer. The dialogue, equally divided between inuendo and insult, and almost wholly unrepeatable in this newspaper, is a kind of personality play of great resourcefulness and skill. And the personalities, highly individualized and often lovely, seem the creation of people actively concerned with making themselves interesting.

Everybody in “Hit Man” is fairly sexy, but the women are sexier than the men (thank God) and the sexiest of all is Pamela Grier, who plays Gozelda, a skin-flick actress of evil ambitions and overwhelming presence, until she is consumed by a hungry tiger in the game preserve. As her more worthy antagonist, Bernie Casey keeps enough cool for half a dozen movie heroes. The rest of the cast is good, and a few, Lisa Moore as the motel keeper Laural Garfoot and Sam Laws as the used-car dealer Sherwood Epps, are pretty close to wonderful.

George Armitage’s direction is often sloppy around the edges, but precise and well observed with whatever matters. A student in the Roger Corman on-the-job-training film school, he has made such unreviewed glories as “Private – Duty Nurses” and “Night Call Nurses.” He seems a real film maker, with a fine sense of excitement and of relaxation in the medium, and I hope he goes far. 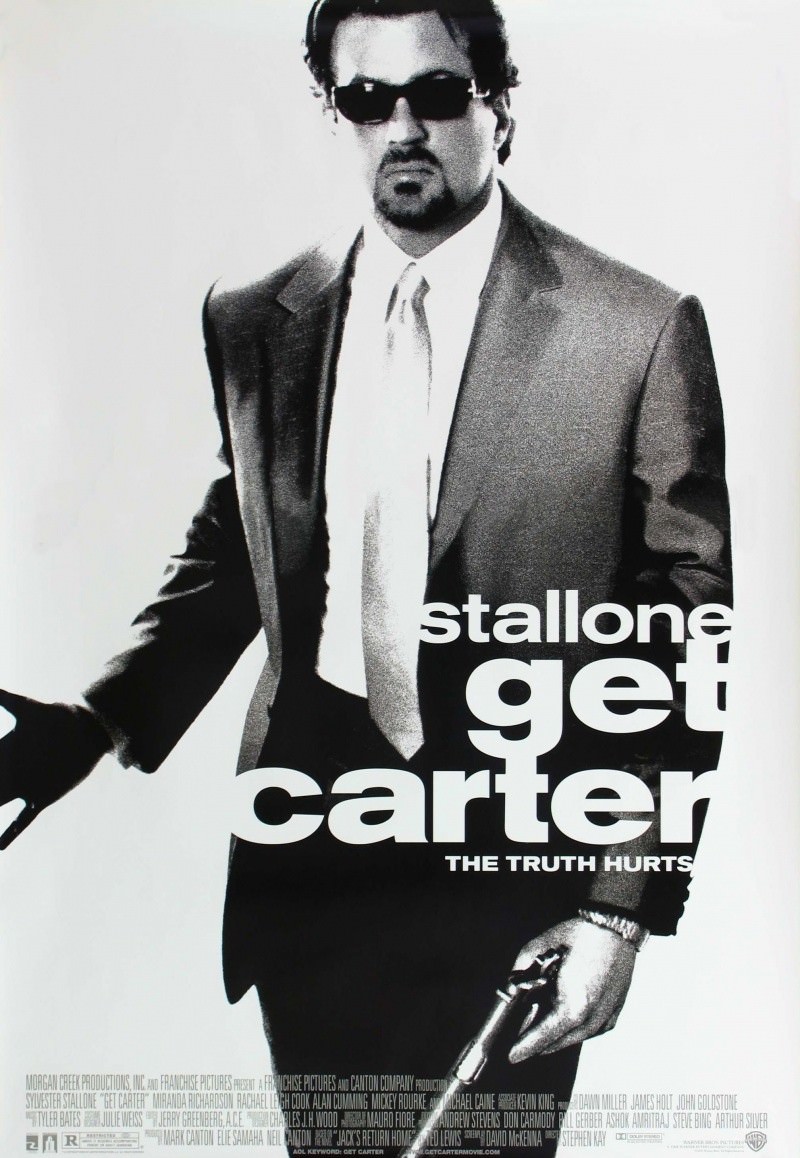 Sylvester Stallone, dragged into the 1990’s by the dazzling and incoherent hand of the director, Stephen Kay, is Jack Carter. Though he comes from Las Vegas, he’s not Jack Carter the motormouth stand-up comedian, but rather a man with an even more lethal specialty: he’s an enforcer for the Vegas mob. He is shown applying his bruising touch to a customer and muttering a last-resort retort: ”This is going to another level.” If the picture bothered to do this, the audience members filing out barely half an hour into the movie might have been enticed to stay.

Carter wears what must be some new kind of miracle fabric version of shantung silk impervious to bloodstains and tears despite his strenuous forays into beatdowns. He spends much of his time storming from one seamy room shot from too many showoff angles to the next, trying to get to the heart of his brother’s murder. Carter flies to Seattle, even though the strong-arm business in Vegas suffers so much from his absence that he’s warned by his brother-in-punishment (John C. McGinley) that if he leaves it’s going to cause him trouble. (McGinley is even more hyperactive than usual; perhaps he was afraid he couldn’t be seen in all the 40-watt-bulb darkness. The film is lighted like the lobby of an Ian Schrager-Philippe Starck hotel, with so much shadow that it deserves an above-the-title credit.)

That doesn’t stop Carter, because he has to make up for having disappeared from his brother’s life for five years. He feels a debt of honor, and although no one ever says it, the B-picture motto — ”somebody’s got to pay” — reverberates through what passes for a plot. This includes Carter threatening sotto voce and a number of actors doing some of their most baroque work. The group includes Mickey Rourke as a computer sleaze merchant and Alan Cumming as a computer ”gazillionaire,” in a turn so fey and peculiar that his work as the Great Gazoo in ”The Flintstones Viva Rock Vegas” was a note of subtle understatement by comparison.

The movie credits the novel ”Jack’s Return Home” as its source, but it is an attempt to remake Mike Hodges’s sleek 1971 British film noir ”Get Carter,” in which Michael Caine was a post-mod, vengeance-minded gangster. (Mr. Caine appears here in a role that will increase regard for the original. Maybe that was his intention.) And like last year’s ”Payback,” which featured another marquee name essaying a seminal tough-guy vehicle — Mel Gibson in what was a remake of ”Point Blank” — ”Carter” is bloody and incoherent.

Mr. Stallone’s new slimline ensemble makes him look like the guy at this week’s hopelessly trendy new club who says, ”I don’t think you’re on the list” without even bothering to check the clipboard. (That makes the scene when he beats up on just such a guy to gain admittance to a club unintentionally funnier than it should be.)

Of course Mr. Caine’s preening caginess made the outbreaks of violence in the original ”Get Carter” all the more stunning, whereas with Mr. Stallone they’re simply inevitable. The big difference is that Stallone doesn’t shoot as many people, which may strike the filmmakers as revolutionary, given their star.

There are many worse Stallone films, as anyone who caught the actor during the late 80’s can attest. Obviously he wants to be different, which he does here by wearing a little beard and not raising his voice. The latter has the effect of making it seem that he gets into so many fights because no one can tell what it is he’s saying. Had the movie played a bit more on his Man That Time Forgot discomfort, it might have been effective.

The stylish murk seems to signal that everyone on the technical crew had his own agenda, each trying to outdo the others. When Mr. Stallone demands that Mr. Rourke peel off his sunglasses so he can see his eyes, the shot is so dark that the moment is pointless. That’s O.K., though; so is the rest of the movie.

”Get Carter” is rated R (Under 17 requires accompanying parent or adult guardian). It includes stylishly rendered scenes of standard B-movie ultraviolence, as well as drug use and a suggestion of rape.